Nasa: Webb space telescope captures photos of a huge cloud of dust around a star in the process of formation 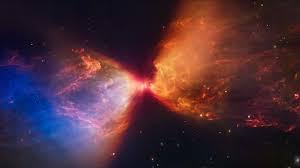 The US Space Agency (NASA) and the European Space Agency announced, in a joint statement, that the James Webb space telescope captured new and amazing images of a huge hourglass-shaped cloud of dust around a star in the process of formation.

According to the Washington Post and the NASA website, these previously unseen orange and blue clouds were spotted by the telescope's "Nircam" instrument, which operates in near infrared that is not visible to the human eye.

The first star, called "Protostar L1527”, is located in the constellation Taurus and is obscured by the tip of a rotating disk of gas at the neck of the hourglass.

According to the statement, the cost of the "James Webb" telescope, which revealed the first color images, amounted to 10 billion dollars.