Death of a co-pilot who fell from a plane 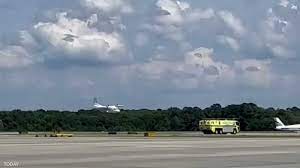 An assistant pilot was killed on Friday after he fell from a small cargo plane that was making an emergency landing in the American state of North Carolina.

ABC News said the body of co-pilot Charles Hugh Crooks, 23, was found in the backyard of a residential area in the town of Folkway Farina, close to Durham International Airport, according to Sky News.

The source added, citing local media: "The copilot did not have a parachute".

The pilot made an emergency landing at the airport on Friday afternoon after reports of a malfunction in the plane's wheels.

The pilot received treatment for minor injuries and was later discharged from hospital.

The pilot was the only person on board when the plane landed.

Local authorities, the Federal Aviation Administration and the National Transportation Safety Board are investigating the incident.
You might like
Read More
تابعونا على الفيس بوك
تابعونا على تويتر
Tweets by Alanbat