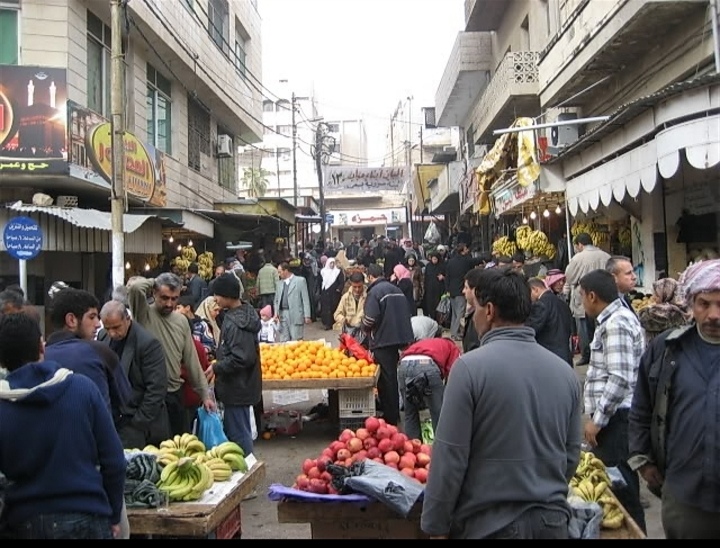 Citizens in Irbid Governorate complained of unprecedented and unjustified increases in the prices of food supplies, vegetable oils, vegetables and fruits, especially as we are on the brink of month of Ramadan, which constituted additional burdens on citizens that exceed their financial capabilities in light of limited salaries and low wages and the negative effects of the Corona pandemic.

On a tour of the Al-Anbat newspaper’s journalists inside the commercial market in the governorate and the parallel markets, she met with citizens to get their views about their supplies and preparations for the holy month, where they expressed their complaints and annoyance as a result of the unjustified rises in prices, especially some food items, vegetable oils, vegetables and fruits.

"Um Yassin "expressed her anger and disapproval at the price hikes that exceed her purchasing capacity, especially under the limited salaries to meet her family needs, knowing that her monthly income no more than two hundred dinars, denouncing the exploitation of traders to raise prices on the pretext of global rise, asking the government to intervene to control the market and stop the Insane rise of prices.  While Sufian Omar pointed out that the prices of oils, sugar and milk have increased significantly.

A number of traders attributed the rise to importers raising prices and monopolizing some materials to raise their price, pointing out that the reasons are due to wholesalers and not retailers, and that prices have increased at a rate of (30%) compared to the prices of last months.

Abu Ali, the owner of a shop, said that he fell between the hammer of major traders and the anvil of the citizen who does not know what we are suffering, especially since we buy goods at high prices and we have no other solutions except to buy at new prices. In the end, the citizen bears the cost.

The trader, Mohammed Jumaa, said that the price of a tank of oil (9) liters, rose to 17.5 dinars, the wholesale price. The government set it a price for sale, causing loss to us, asking the concerned authorities to reconsider the price of some materials to spare traders losses, explaining that rice (4) kilos is sold at 3.85 dinars, and sugar (10) Kilos with3.25 and Nido Milk 2.25 Kilos with 9.25 Dinars.

In turn, the wholesaler, Akram Arafat, denied the idea of monopolizing goods in order to control prices, explaining that prices are governed by price ceilings from the ministry and any rise in prices that we have nothing to do with.

For example, a "tank" of oil was 27 dinars two days ago, and they increased it by two dinars.

He added that commodity price indicators have been monitored for basic materials and have been attached to daily indicators of the Ministry of Industry and that the quantities of foodstuffs available in the markets are lifted on a daily basis.

The strategic stock in Irbid governorate is followed up, and any shortage or problem is submitted to the Ministry with daily reports.

A price ceilings for commodity prices are set among the indicators that are submitted to the Ministry.

Al-Jamra indicated that during this month, 90 violations were detected, and we took the necessary action with the violators regarding non-compliance with the pricing.

The President of Irbid Chamber of Commerce Mohammed Al-Shouha on his part said that all materials and goods are available and there is no shortage of quantities offered in the market and that recent government procedures to reduce the rate of customs on some goods will have a positive impact on citizens in terms of the abundance of high goods in the country of origin and the rise Freight charges, explaining that reducing customs on some goods will be a remedy for the rise so that citizens can obtain them at reasonable prices.

He added that the government closely follows and monitors what is happening inside the markets and follows up on the process of exploiting citizens by any trader, especially since sanctions against exploited traders are deterrent, pointing out that the Chamber is following up on what is happening inside.
You might like
Read More
تابعونا على الفيس بوك
تابعونا على تويتر
Tweets by Alanbat