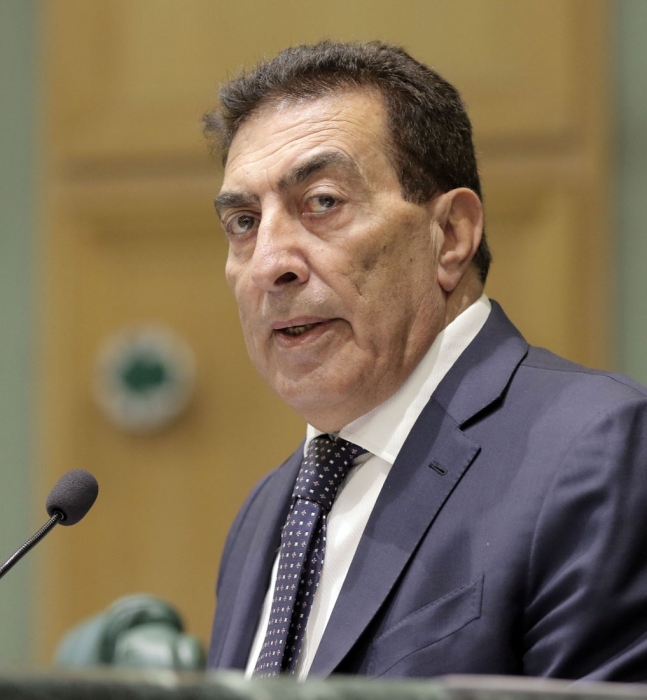 Chairing an extraordinary meeting of the Arab Inter-Parliamentary Union (APU) here in Amman, the House Speaker stressed that there are no prospects or viability for any solution that the Palestinian people rejects or does not guarantee their legitimate right to an independent state on pre-June 4, 1967 lines with East Jerusalem as its capital.

Tarawneh, who is also APU president, renewed the call for adherence to international legitimacy resolutions, particularly those pertaining to the right of the refugees to return their homeland and halting all illegal Israeli settlement construction.

The Speaker underlined commitment to the Arab identity of Jerusalem's holy sites and the Hashemite Custodianship over them. He said today's meeting is a step towards building up a concerted pan-Arab effort, demanding an end to an "alleged peace play, backed by a mediator who is no longer fair."

He said the Israel, emboldened by U.S. bias, is pursuing an unjust settlement to a just cause, adding: "This requires us to take positions beyond rhetoric and slogans".

The House Speaker referred to His Majesty King Abdullah II's rejection of all attempts that seek to compromise or alter the status quo in Jerusalem or settle the Palestinians in other countries.

Speaker of the Palestinian National Council, Saleem Zaanoun, described the U.S. plan as "destructive and rejected" because its relinquishes the right of the return and gives all of Jerusalem to Israel and serves its interests only.

Zaanoun called on the APU to express total rejection of the plan and urged APU member states to provide sufficient financial support to strengthen the Palestinian people's steadfastness and launch a broader international effort against the plan.

Speaker of the Assembly of the Representatives of the People of Tunisia, Rached Ghannouchi, said: "Palestine is not a commodity for sale, and Jerusalem is not a trade so that there will be a deal", warning that the plan has opened a new door for tension in the Middle East.

Ghannouchi emphasized that a Palestinian reconciliation would be the strongest response to the plan.

Speaker of the People's Council of Syria, Hammouda Sabbagh, described the U.S. plan as "nothing but a scheme intended to liquidate the [Palestinian] cause" and opens the door for a new Middle East project which the Arabs "will fall victims to".

"We are facing a major test entitled reversing the challenge and confronting the American contempt for international legitimacy resolutions", Sabbagh said.

Somali Parliament Speaker Mohamed Sheikh Abdel-Rahman said that the Palestinian issue is going through a dangerous turn in light of the Israeli plans, calling for extending further support to the Palestinian people.

He underscored that the Hashemite custodianship of Jerusalem's Islamic and Christian is a historical responsibility that Jordan has taken on behalf of the Arab and Muslim worlds.
Kuwaiti Parliament Speaker Marzouq Al-Ghanem said that the "deal of the century" was born dead and was dismissed by the Palestinians and all Arab and Islamic countries.

The US deal, he added, was not signed and that true peace is (only attainable) via the establishment of a Palestinian state on all its soil with Jerusalem its capital, adding that Arabs are with any peace effort that safeguards the Arab identity of Jerusalem with its Islamic and Christian sanctities and the right of return.

Al-Ghanem tossed a copy of the deal to the ground, saying such documents are "doomed to the dustbin of history."

Bahrain Parliament Speaker, Fawzia Bint Abdullah, called for uniting Arab ranks, stressing that Arab decisions should be consistent with "our principles," reiterating the Gulf Arab state's firm support of the Palestinian rights and aspirations for statehood.

Iraqi Parliament Speaker Muhammad al-Halbousi, said "we meet in Amman, the custodian of the Jerusalem holy sites and supporter of Palestinians," reiterating Iraq’s solidarity with the Palestinian people toward the establishment of an independent state with Jerusalem as its capital.

In his remarks, Oman's Parliament Speaker, Khalid Al-Ma’mouri, said that the Al-Aqsa Mosque is Islam's third holiest shrine and a unifier of the Arab and Muslim world. He branded the proposed "deal of the century" as "unfair", and does not meet the rights of the Palestinian people, stressing Oman's firm position on Palestinian statehood and the right of return.

Lebanese Parliamentary Speaker, Nabih Berri, said the "deal of the century" is not an enterprise for peace, but one for war, which would take the region to the unknown. Noting that the US peace plan had dropped the right of return of Palestinian refugees, he called on Arabs not to curry favour with "the executioner, as Palestine needs swords with it, not on it".

Aqil Al-Saleh, Libya's Parliament Speaker, said that any deal or initiative that is not based on the Arab Peace Initiative cannot be accepted, stressing the establishment of an Palestinian state with Jerusalem as its capital, and calling for Palestinian unity.
United Arab Emirates National Council Speaker Saqr Ghobash clarified that the UAE's position on the Palestinian issue is based on three fundamentals: the centrality of the two-state solution, UN Security Council resolutions and the Arab Peace Initiative with Palestinian consensus toward ending the occupation and fulfilling the legitimate Palestinian aspirations to set up an independent state with East Jerusalem its capital.

In his remarks, Speaker of the Qatari Shura Council, Ahmad Al Mahmoud, said that the unilateral Israeli measures are one of the forms of escalation against the Palestinian people, who seek peace and statehood, stressing the Gulf Arab state's support of the Palestinians, "whose issue is the issue of Arabs and Muslims."

Egypt's People's Assembly Speaker, Ali Abdel Aal, said that the Palestinian cause is the "central issue of all Arabs," stressing Cairo's support of the Palestinians to set up their independent state on the borders of June 4, 1967, with East Jerusalem as its capital.

Yemen House of Representatives Speaker, Sultan Al-Barakani, pointed out that his country upholds its firm position on the Palestinian cause, the cause of all Arabs and Muslims, commenting that the deal announced by the US president is a "slap of the century that is meant to steal Palestine from us, and the loss of Jerusalem forever."