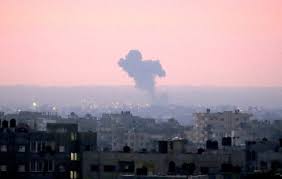 "The occupation aircrafts bombed a number of missiles at Palestinian lands east of Rafah, and east of Al-Qarara in Khan Yunis, causing property damage, but no injuries were reported," the sources said.

Israeli army spokesman claimed that two rockets were fired today at dawn from the northern Gaza Strip towards the beach area near the city of Ashdod, adding that no casualties were recorded.